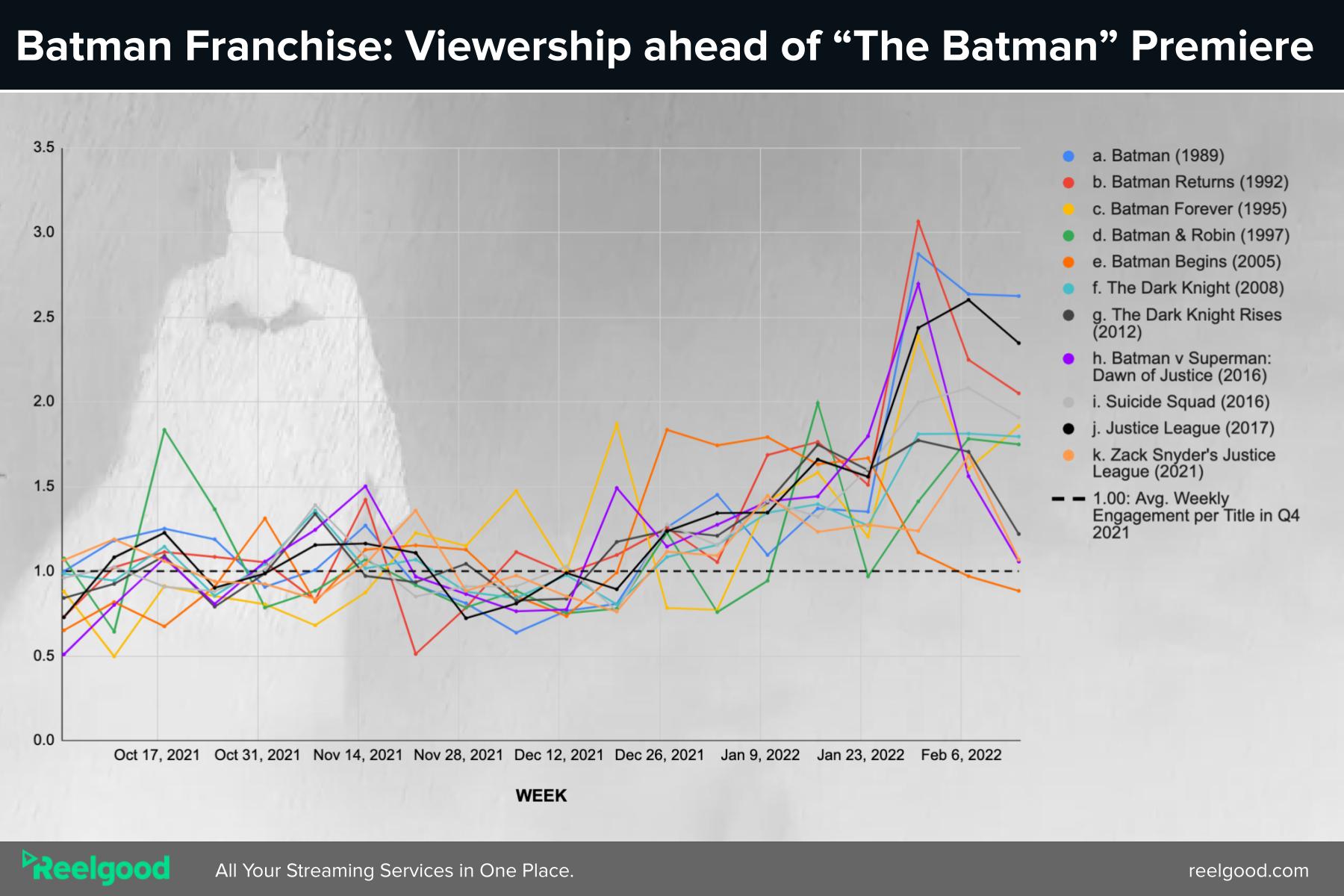 Welcome to the first Reelgood for Business newsletter of the year. Here’s what’s happening in the streaming world. (Scroll for the full stories.)

The folks at Apple TV+ are having a great Q1.

Other big wins for Apple TV+ include The Afterparty which cracked the Reelgood Top 10 just two days after its release and their hit show Severance has been the most popular show on any streaming service for three weeks in a row.

Apple has also announced they’re getting into sports with the acquisition of MLB streaming rights.

2. How viewing for all movies in the Batman franchise changed ahead of the theatrical release of The Batman.

The biggest winners here were HBOMax, Netflix, Hulu, and Tubi. Hulu had the largest share of viewership of the older Batman movies, with Batman Begins (2005) amongst the most popular titles. “The Batman” will be available to stream just 45 days after its theatrical release, on April 19 on HBOMax (click here to get notified when you can stream it.)

Our data showed that, compared to Q4 2021, engagement for Batman movies increased 63% in 2022 ahead of the theatrical release of “The Batman.” The spike on the week of Jan. 31 coincides with Matt Reeves and Warner Bros. announcing the sale date of “The Batman” tickets.*Data is based on weekly streaming and engagement activity on Reelgood platforms for Batman movies. Data is indexed against the average of each title’s weekly streaming and engagement activity in Q4 2021. Weekly engagement is an aggregate of behavioral data on the Reelgood site and apps, including playback, tracking, and other interactions.

We are already seeing our clients benefit from Tim’s longstanding expertise in helping companies solve the streaming fragmentation problem for their users.

Reach out and say hi: tim@reelgood.com and read the announcement here.

4. How streaming services are changing their catalogs in response to evolving consumer demand.

If you’d like to better understand how consumers changed their streaming preferences during the second year of the pandemic, check out our team’s most recent whitepaper:

5. “Watching television shouldn’t be this hard.”—NYTimes

This recent NYT piece bemoans the impact of streaming fragmentation—highlighting the fact that intricate licensing deals make it increasingly difficult to figure out where to watch your favorite show.

The writer concludes the piece by highlighting Reelgood as the solution to this problem. The all-in-one streaming experience we provide at Reelgood isn’t a nice-to-have—it’s become core functionality. This is why we continue to invest in providing the best data in the streaming world.

Questions or feedback on this newsletter?

Hit reply. I’d love to hear from you.